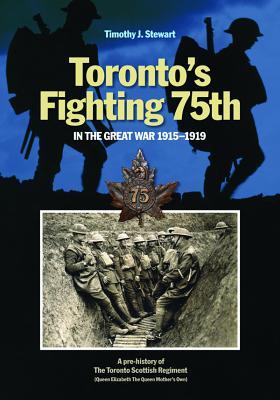 Those soldiers who survived would spend almost three years in a tiny corner of northeastern France and northwestern Belgium (Flanders), where many of their comrades still lie. And they would serve in many of the most horrific battles of that long, bloody conflict Saint Eloi, the Somme, Arras, Vimy, Hill 70, Lens, Passchendaele, Amiens, Drocourt-Queant, Canal du Nord, Cambrai, and Valenciennes.This book tells the story of the 75th Battalion (later the Toronto Scottish Regiment) and the five thousand men who formed it most from Toronto from all walks of life.

They included professionals, university graduates, white- and blue-collar workers, labourers, and the unemployed, some illiterate. They left a comfortable existence in the prosperous, strongly pro-British provincial capital for life in the trenches of France and Flanders. Tommy Church, mayor of Toronto from 1915 to 1921, sought to include his city s name in the unit s name because of the many city officials and local residents who served in it. Three years later Church accepted the 75th s now heavily emblazoned colours for safekeeping at City Hall from Lieutenant-Colonel Colin Harbottle, who returned with his bloodied but successful survivors.

Comments
Comments for "Toronto S Fighting 75th in the Great War: A Prehistory of the Toronto Scottish Regiment":